Summer of Racing at America’s Cup 2013

From the www.AmericasCup.com site – see information below:

The America’s Cup is the oldest trophy in international sport and the hardest to win. Only four countries – the United States, Australia, New Zealand and Switzerland – have experienced the euphoria of winning the “Auld Mug,” and only seven cities have hosted the competition before San Francisco.

First contested in 1851, the America’s Cup is the oldest trophy in international sport, pre-dating the modern Olympics by 45 years, and is yachting’s biggest prize. The trophy’s roots date back to when a syndicate of businessmen from New York sailed the schooner America across the Atlantic Ocean to represent the United States at the World’s Fair in England. The schooner won a race around the Isle of Wight and, with it, a trophy called the £100 Cup. (It was subsequently inscribed, incorrectly, as the 100 Guineas Cup.)

The Summer of Racing

On September 7, the America’s Cup Defender, ORACLE TEAM USA, is scheduled to line up for Race 1, the first of 17 possible races, against one of three challenging teams: Artemis Racing, Emirates Team New Zealand, or Luna Rossa Challenge 2013. Before then, on July 7, the three challengers are scheduled to begin contesting the Louis Vuitton Cup, the America’s Cup Challenger Series. The winner of that regatta, the event’s 30th, will become the challenger to ORACLE TEAM USA in the 2013 America’s Cup Finals. One of the most notable changes to the format is the AC72, the wing-sail catamaran that is capable of speeds typically seen on the highways of America. At 43 knots boatspeed, the AC72 is capable of sailing its 72-foot length in a single second. The demand on the sailors is unprecedented; only the most athletic and multi-talented need apply.

The venue itself is an important part of the story. San Francisco Bay is among the world’s premier sailing spots because of its reliable winds and challenging tides; a stunning natural amphitheater that is framed in part by the world-renowned Golden Gate Bridge. Racing is inshore and close to the public, the short racecourses will bring the sailors within earshot of the roaring spectators as the boats charge along the city front.

Tight racing is expected on a compact racecourse that keeps the crews close to each other. And with the racecourse nearer to shore than ever before, this America’s Cup will deliver “stadium sailing” on the Bay Arena at its best, where the sailors can hear the roar of the crowds and spectators can all but reach out and touch the boats as they fly past. An unexpected and innovative development in the design of the AC72s—the addition of hydrofoils—now allows the seven-ton craft to lift out of the water and “fly” on foils. At speed, the hydrofoils, positioned at the bottom of the daggerboards and rudders, generate enough lifting force to raise the AC72’s two hulls clear of the water, reducing hull drag and adding yet more speed.

With this speed comes a new challenge. Controlling the boats while they fly on their foils is, for the sailors, an immensely difficult task. Many think that victory in this America’s Cup will go to the team that best masters the promise and the challenges of the hydrofoils and the attendant issues of speed, risk, skill, and nerve.

Transformative television graphics add layers of information to the screen, making the racing easier to understand than ever before. The Emmy Award-winning AC LiveLine graphics are just one element of a television production that sets a new standard for sport. The action won’t be solely on the water. The America’s Cup Park, at Piers 27/29, will host daily activities as well as the America’s Cup Concert Series. A second venue, the America’s Cup Village, at Marina Green, will be active on race days. Both venues are free to enter, and feature a full range of educational, interactive and entertainment features, plus food, beverage and official America’s Cup and team apparel.

All in all, the 2013 America’s Cup stands to offer exhilarating racing and shoreside activities to excite visitors of all ages. 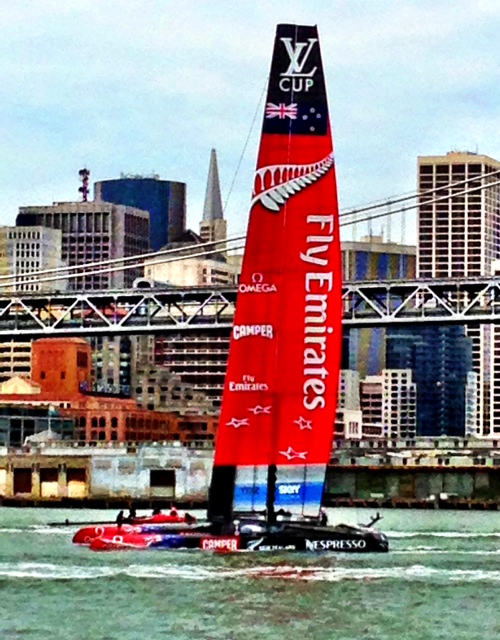 Emirates Flies on Water!
Interested in planning your own customized adventure? Global Adventuress can help! Email us today!