Cut the each potato into 4 pieces and boil them all until they are practically senseless. Chop the onions, jalapenos and set them aside. Nuke the peas all this is going on as well. Set a saute pan to medium heat, pour some oil and throw in the onions. After they get caramelized, add half tablespoon each of the garlic, ginger pastes and a teaspoon of Turmeric. After they look cooked [its raw garlic that leaves your guests smelling bad], add the diced jalapenos and peas. Get them to all sizzle a for a while. Add garam masala liberally to the concoction and add some salt as well.

Unpack the puff pastry sheets so that they thaw. Preheat the oven to 375F. After the potatoes cool down, summon a minion to peel and mash them. Move the contents from the saute pan into a big cauldron. Keep stiring the contents of the cauldron while adding mashed potatoes.to it. Now is also a good time to add in some cilantro. Congratulations, the stuffing is now ready.

Cut each puff pastry sheet into 4 equal squares. Place some of the stuffing onto each square. Fold along the diagonal and seal them. Place on a baking sheet and put them in the oven for 10-15 minutes. Check on them in the interim and turn them over if you feel like it.

Serve with mint and/or tamarind chutneys – available at your neighborhood Indian stores.

Dice the Tomatoes into 1 inch cubes and finely mince the garlic. Move these ingredients to a bowl. Add some salt, paprika and pepper. Sprinkle a few drops of Balsamic Vinegar. And then pour in the Olive Oil. Mix this stuff in using a
couple of forks.  Now comes the bread. Use French Bread if you are going to eat immediately; French Bread always tastes far better than Italian). Use Italian Rustica if you might eat later as it doesnt get as soggy as French Bread. Set the oven to
Broil mode. Slice the bread into 1 inch slices and when the oven has heated up, place the bread slices on a baking tray. When they are crispy and dry (in a minute or two), remove the tray and flip the bread over. Bruschette is all
about the bread being dry. Scoop some of the tomatoey mixture onto each slice and spread evenly. Place this back in the oven. Check every minute or two. It should be done by the time the bread starts to brown.

Cool for about three minutes before serving. Open a bottle of Chianti or Montepulciano.

Preheat oven to 400ºF. Grind ginger, garlic and green chilies into a paste. Mix the Tandoori Masala and oil and some salt into this paste. Dip the Paneer cubes into this paste. Place them apart on an aluminum foil and bake them for 10
minutes. (Please don’t hold me to the 10 minutes, keep checking until they took done).

The next two recipes, Chole and Rajma, have a lot of the same ingredients. I shall list them out along with the first recipe and mention the different ingredients required for the Rajma recipe that follows.

When mincing the garlic and ginger (and the optional Jalapeno pepper), make a paste.

Heat Oil in the pot. Add some cumin seeds and onions to the oil. Sprinkle a little turmeric and the garlic/ginger paste. Enjoy the pooossssshh-pooossshhh sounds that this medley makes. Sauté the onions until browned – about 5 minutes. Throw in the tomatoes.

Add a couple of teaspoons of Garam Masala, a dash of Cayenne Red Pepper and salt (to taste). Now add the butter (two tablespoons, if you aren’t super weight conscious).

Once this gravy starts making you hungry, add the beans to this mixture. Add the water and cover. After refilling your glass of wine (and 15 or so minutes), this stuff should be ready for consumption.

Chop (or separate the cilantro leaves) and arrange them on the Chole as garnishing (I use them to make the food look more appealing). Heat some tortillas and party on.

Note: If you can, get hold of Chana Masala instead of Garam Masala (more generic), it might turn out better.

(This recipe is adapted from the Chole one above]

(same as for the Chole except at *asterisk*)

When mincing the garlic and ginger (and the optional Jalapeno pepper), make a paste.

Heat oil in a pot. Add some cumin seeds and the onions. Sprinkle a little turmeric and add the garlic/ginger paste. Enjoy the pooossssshh-pooossshhh sounds that this medley makes. Make sure the onions are browned. Throw in tomatoes now. Add lots of tomato juice, the more the better. (If you are using canned peeled, diced, tomatoes, then you will get a lot of juice with it.)

Cook till the tomatoes are all skwooshed – about 12 minutes (3-5 minutes if using canned tomatoes). [puchuk-puchuk sounds will emanate from the broth by this time].

Add the Garam Masala, a dash of Cayenne Red Pepper and salt. Add butter (two tablespoons if you aren’t super weight conscious). Once this gravy starts making you hungry, add the red beans and the water, cover and let simmer so
that it gradually thickens – 15 minutes or so. If it becomes too thick, addmore water and again let it cook for a while – the idea is to let the rajma cook in the Garam Masala.

Watch some television or change the CD playing. Refill your guests’ wine glass. A lot of the water should evaporate by which time this stuff should be ready for consumption.

Chop (or separate the cilantro leaves) and arrange them on the Rajma as garnishing (I use them to make the food took more appealing). Eat with rice or tortillas.

Now that we are ready, a couple of useful tips:

Grind the cardamom in a mortar and set aside.

Coarsely grind the pistachios in a mortar and set aside.

In a saucepan, bring the condensed milk and evaporated milk together in low flame (4 of 10)

Let it warm up for 5 minutes.

Let it simmer while you stir it for 20 minutes

Remove from flame and let it cool down

Cover each with Saran wrap.

Place in freezer for 4 hours

Sprinkle some rose essence on each 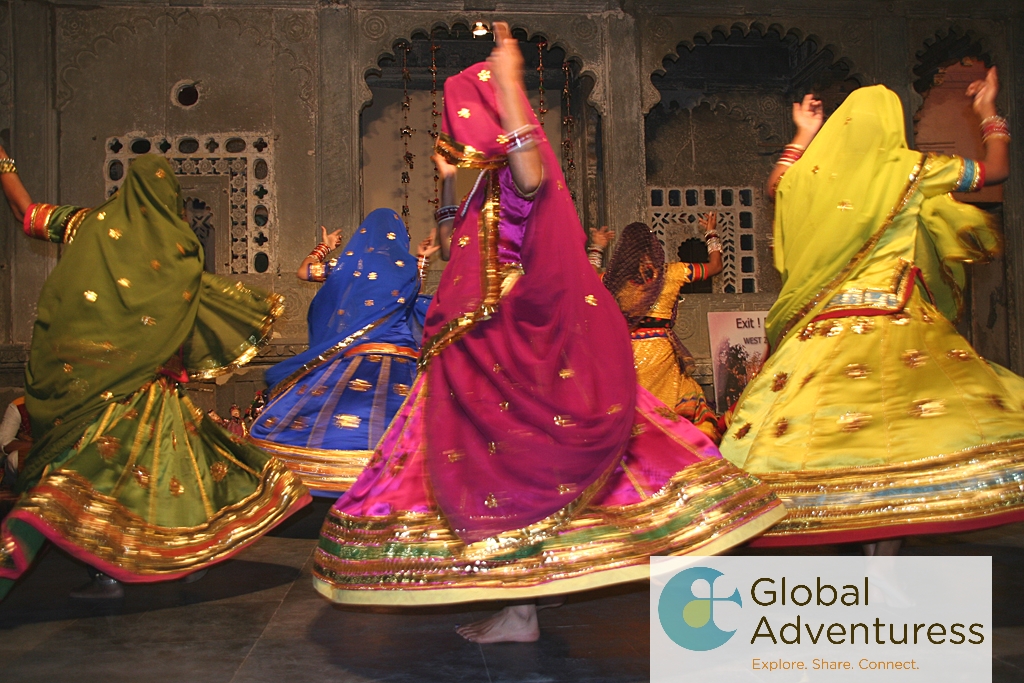 Travels in Rajasthan, India
Interested in planning your own customized adventure? Global Adventuress can help! Email us today!