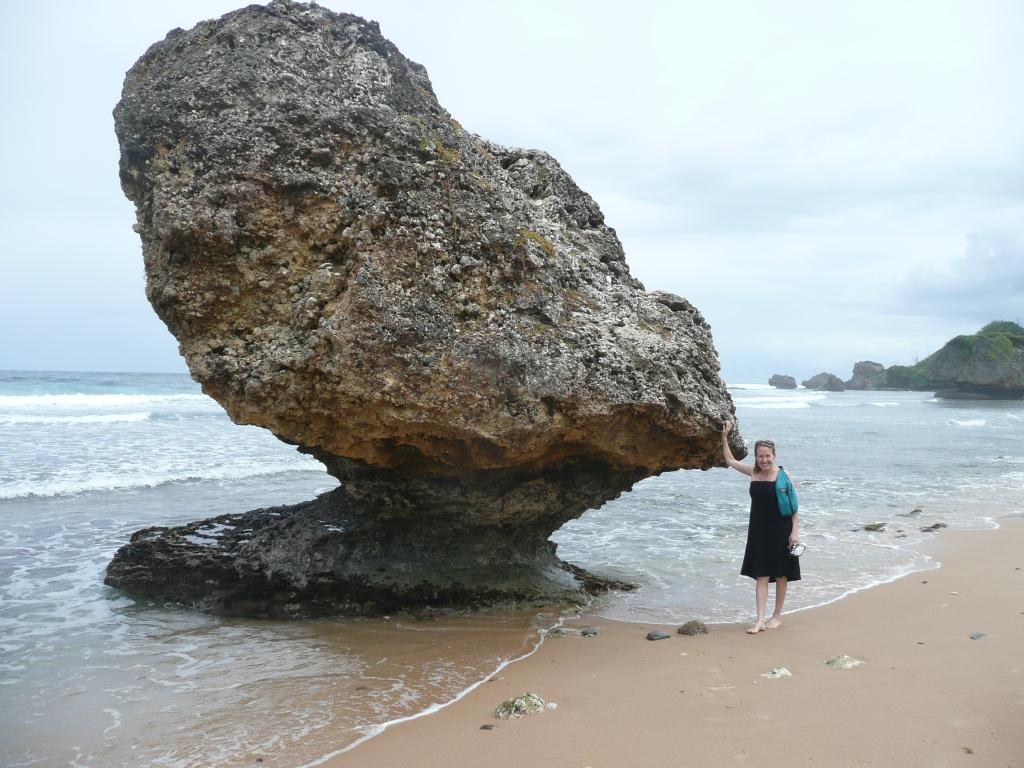 Barbados is known as the warm and sunny cousin of England.  Approx. 4,000 miles away from its homeland, and close to 15 degrees north  of the equator, Barbados is a popular destination for both Americans and Europeans with up to 80 beaches on 70+ miles of coastline.  The island is named after the abundance of fiscus trees with aerial roots that resemble beards, hence Los Barbados.  Only 5% of Barbados taxi drivers are women, so we were fortunate to meet Angela and get a woman’s perspective about Barbados.  It was the day after Christmas, “Boxing Day”, and the roads were empty so we were able to get around the island in a few hours.

Angela, our driver and guide (Angela’s Taxi Service, Cell:  233-3936), lives up to her tagline, “Courteous, Prompt and Reliable”, and I’d like to add “Knowledgeable”!  She drove us around Barbados and provided an informative coast to coast tour with facts about the island’s history – rum distilleries, sugar cane plantations, pirate pranks, and most profound, her personal story about her family’s hardships and how they overcame the challenges of slavery and what their life is like in Barbados today.  She was patient with all my questions and even shared recipes from her family’s Christmas Day dinner – “Jug Jug” a meat & pea Bajan favorite, rice pie, baked spicey chicken, curried goat, sweet potatoes, yam pie, corn pie, rum cake….what a feast!

Angela started her tour by commenting on the shape of Barbado’s, “if you look at it this way, it resembles a hambone, and if you turn it upside down it looks like Africa”.

After Spanish explorers arrived in the 1400’s, then the Portuguese in 1536, after which they both decided not to settle here.  In 1625, the British arrived on the English Ship Olive Blossom and claimed Barbados, then became a British Colony within a couple years.  Still owned by the British, there are almost 300,000 residents and Barbados is one of the most developed islands in the Caribbean.

From the main city, Bridgetown, we headed up the northwest coast of Barbados, passing the Mt. Gay Rum Distillery

, driving through the tony neighborhoods between Holetown and Speightstown.  We passed by several historic as well as recently built mansions, and Angela took us past the finest 18-hole golf course and country club where Tiger Woods was married – the Sandy Lane golf course.

Sandy Lane is one of the swankiest beach resorts in the world, and the resort fiercely protects the privacy of its guests.

We passed the Holetown Chattel Village Shops (closed for the holiday), and met some locals along the way celebrating Boxing Day with their families.

Then we stopped at one of the first and oldest Parish Churches in Barbados – St. James Parish, built in 1847.

Barbados is divided into 11 Parishes, each Parish has a church rich in history and tradition.

As we continued northeast, there were sugar cane fields towering at 9 +feet that lined the road leading us to St. Nicholas Abbey, then Cherry Tree Hill for a spectacular vista of the eastern coast with its rolling hills and valleys.

I was surprised to find a dramatic view of the rugged mountainous eastern side of Barbados, where you can see ~1,000 ft. green mountains surrounded by sugar cane fields that cover the coastal area- it’s a tropical Scotland!  After taking some photos, we followed the road downhill to the coast, and even passed a historic windmill along the way.

The next photo stop was at Bathsheba Beach

, where massive reef boulders are anchored in the sand.

We drove up to get a view of the beach and the giant boulders, and sighted a tree full of green monkeys.  After taking a few photos, I jumped back in the car, and we drove past St. John’s Parish Church, a classic Gothic church perched on a cliff,

and St. Philip’s Parish Church before arriving to the Sunbury Plantation House, http://www.barbadosgreathouse.com/ one of the few sugar estate houses where you can tour the interior and even dine and hear about its history dating back to the 1660’s, but rebuilt in 1836.

As we headed back to Bridgetown, I looked at the southern island views of fertile fields growing a variety of vegetables and fruits.  Along the way, there were plentiful fruits stands.

We didn’t make it to the Harrison Caves with stunning stalagmites and stalactites, Orchid World, Botanical Gardens, the Wildlife Reserve, the Canopy Zip Line Adventure, or the 300 year old Mount Gay Rum Factory – the longest standing rum producer in the world.  Nor did we visit the Southern coastal towns like Oistins, where seafood (the catch of the day) is plentiful, and music abounds every night, nor did we get to Crane Beach, known to be one of Barbados finest beaches.  But now we have many reasons to return and stay longer.  By our next visit, Angela’s daughter will be old enough to drive, but Angela is sending her to college and she might choose another profession.

If you’d like to try out the recipe for the Bajan special “Jug-Jug”, here it is:

Cut salt meat in small pieces and bring to boil.  Throw off water, add cold water to cover and set aside for approx.2-3 hrs.  Pour oil in heavy pot. Add garlic cook for five (5) mins to extract flavour. Add green peas and stir until skins burst. Add meats and water, simmer until soft. Mix flour in enough cold water to remove all lumps. Stir in with peas and meat mixture.  Cook slowly, stirring all the time until mixture is smooth. 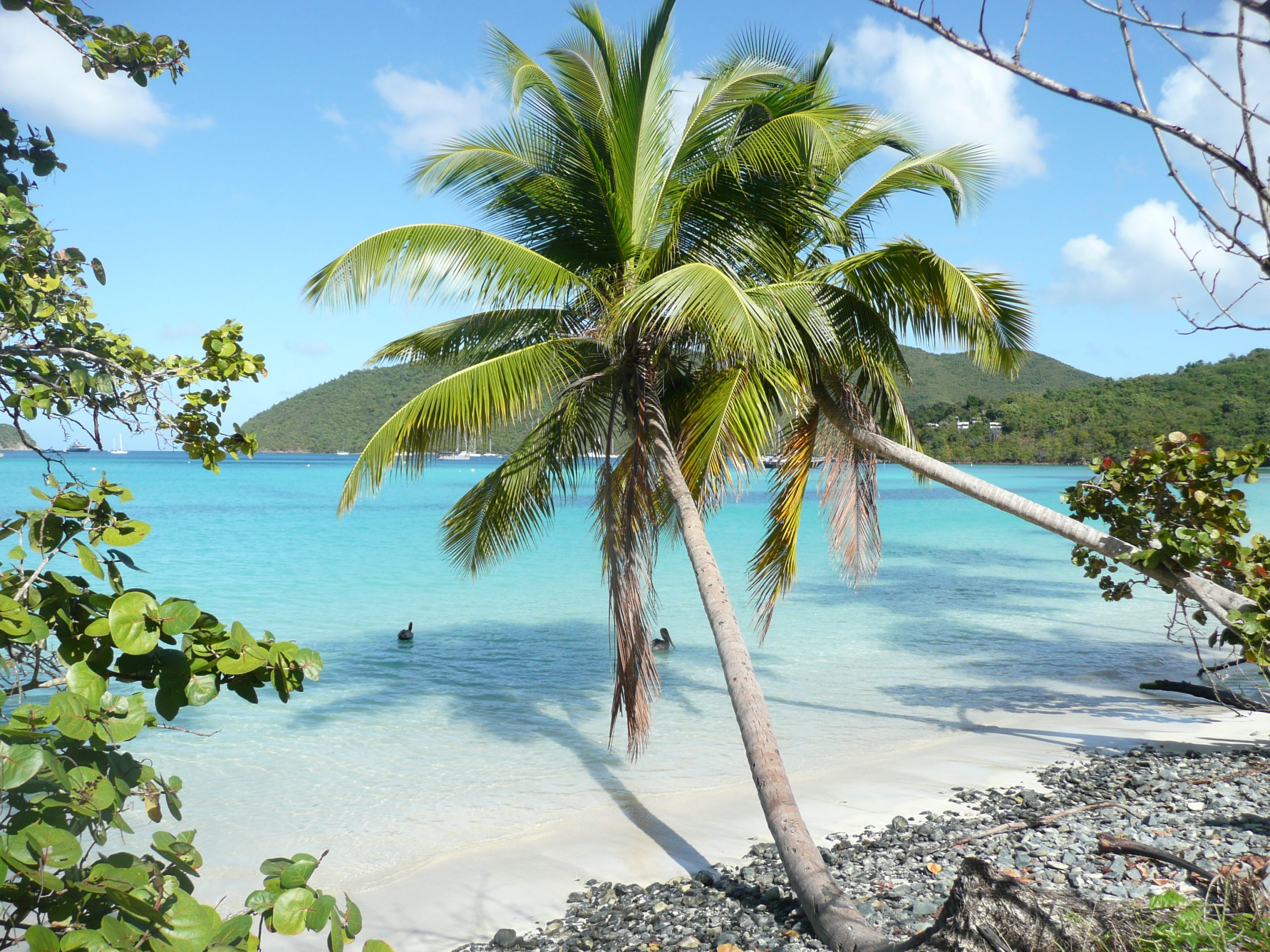 St. John, the Eco Friendly Island
Interested in planning your own customized adventure? Global Adventuress can help! Email us today!