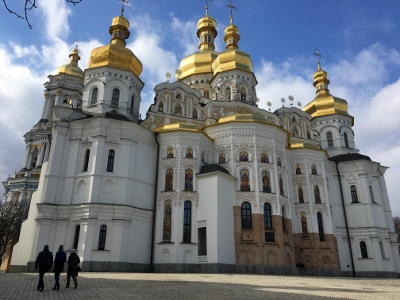 Kiev is one of the oldest cities in Europe.  It’s the capital city of the Ukraine, located in the north central area, and home to about 4 million people. Dating back to the 5th century, the Ukraine has been seized and occupied by other countries.  A former Slavic trading center, captured by the Vikings in the 9th century, invaded by the Mongols in the 12th-century, then for centuries controlled by Poland and Russia.  The Ukraine became part of the Russian Empire in the 19th century, and suffered damage in WW II.  Every time, this country has made a come back. Since the collapse of the Soviet Union in 1991, the Ukraine has recovered, and is progressing forward with its own identity.  It’s the new frontier of Europe, and its people are strong-spirited, very hospitable and they welcome visitors with warm hearts. Hugging the Dnieper River, Kiev’s gold-domed churches standout in the skyline.  We spent two days seeing monuments, churches, museums, markets, art murals, and learned there’s a lot to discover.  Don’t miss!  So much to discover, but a highlight was the 11th-century Kiev Pechersk Lavra monastery, catacombs, and collection of gold from the ancient Scythian period. Sharing our 48 hours in Kiev and recommendations on what to see, where to stay & dine.

We highly recommend reserving a tour with a private guide since Kiev is not an easy city to navigate.  Our guide Pavel Korsun is a tour and travel guide who knows Kiev extremely well and can also guide tours throughout the Ukraine.  You can view his site and tours available at here.  Pavel can customize your tour and accommodate your needs/interests. For reference, here’s our 2 days of touring with Pavel and seeing the highlights of the city. Good to Note:  If you’re time is limited to a 1/2 day, you can opt for Pavel’s Kiev Basic Walking Tour, a simple 3 hours sightseeing tour focused on the most famous landmarks of central Kiev. Usually starting from Kreshatik boulevard or your hotel lobby, the tour includes the Kreshatik, the high street of Kiev build in 1950’s Stalinist architectural style, UNESCO listed Sofiyaska cathedral, the Michailsky church which was destroyed by communists and recently rebuilt according to original plans and picturesque Andreivski uzviz with daily souvenir market and lively atmosphere.

This is the first design hotel in Kiev.  I highly recommend this hotel.  The service is superb.  The rooms are spacious with every modern comfort, and nicely designed.  The in-house restaurant has a delicious breakfast, and offers healthy dining options. Each of the 11 Mirrors’ 49 rooms and suites offers guests spa-inspired bathrooms and unparalleled urban views of Kiev. Rooms come in assorted sizes, with the Incognito Superior Room crafted for those who value privacy most. The Desire Deluxe Rooms offer floor-to-ceiling windows to maximize views of the Golden Gate, St. Sophia Cathedral, and charming buildings from the 19th century. Signature Premium Rooms, which include an oversized tub and open bar, combine the two powerful elements air and water. While Lifestyle Executive Suites, which connect two adjoining room (each with a king-size bed) are bathed in light and include a fully stocked private bar. 11 Mirrors was conceived by Ukrainian sportsman Wladimir Klitschko, also known as “Dr. Steelhammer” in the boxing community. And Klitschko is “Dr.” for a reason: in addition to being a long-reigning heavyweight champion, he holds a PhD in sports medicine. A seasoned world traveler, Klitschko was able to reflect upon his own experiences when creating the concept for 11 Mirrors.

Here are some recommendations from the concierge about where to spa, dine and shop.

Global Adventuress thanks 11 Mirrors Hotel, the first design hotel in Kiev, for hosting us during our stay.  Also we thank Pavel Korsun, fantastic Ukraine tour and travel guide for sharing Kiev highlights with us (Cell-Phone, Viber, WhatsApp: 38 050 936 96 80, Skype: pavelkorsun).

See more our our travels through Europe below! 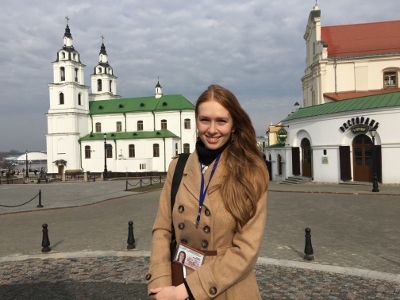 A Day in Minsk, Belarus

A Day in Minsk, Belarus
Interested in planning your own customized adventure? Global Adventuress can help! Email us today!