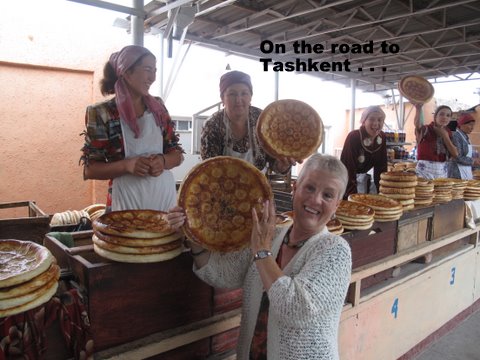 Donna and her husband Don share their adventures from their 21 day adventure to “The 5 Stans” which include:  Kazakhstan, Kyrgyzstan, Uzbekistan, Tajikistan and Turkmenistan.  These countries are located in Ancient Persia, Modern Iran.

Here are a few photos and a couple entries from their travelogue:

“The Stans are wonderful countries, much more advanced and “westernized” than we ever imagined!  People are so friendly and love practicing their English with us.  The country sides are varied from lush forests to open, brown deserts!  We finally saw 2 camels today, on our 8 hour bus ride from Samarkand to Buhkara. Not too many dogs, and very few cats ~ lots of horses, cattle, goats and donkeys carrying people and goods!  GM bought Dae Woo car company in Uzb. so that’s what you see ~ some countries are all Mercedes and BMW’s.  We have seen multiple mosques, mausoleums and madrassahs (Islamic schools) ~ 13th Century, earlier and later.  The bazaars are wonderful and pretty cheap, but oh so, crowded with shoppers getting ready to go back to school!  All 5 Stans are celebrating 20 years of independence from Russia with lots of festivities and celebrations.   Food is not bad, though beginning to get a little repetitious ~ beef, chicken, mutton, and veggies, rice and bread.  Watermelon is the standard dessert, and you’ve never seen so many trucks full of watermelons in your life!! There is a lot more to tell you, but this will have to suffice for tonight ~ we’ve had a very long day, and ready for a good night’s sleep in our very cute little boutique hotel ~ Sasha and Son’s B&B, right next to the Jewish Quarter ~ we’re off again early in the morning for a day of sightseeing ~ monuments, museums, mausoleums, madrassahs and bazaars!” “As you know, we started this Silk Road adventure in Almaty, Kazakhstan, the commercial capital of Central Asia’s richest country. The capital was moved to Astana in 1997, because the President felt that Almaty was too “Russianized”. Independence from Russia was achieved in 1991. Kazakhstan has 16 million people.  We moved on to Kyrgyzstan, on a very long bus ride to Lake Issyk-Kul, the second largest high altitude lake in the world. This lake is slightly alkaline with no outlet, surrounded by the rugged Tien Shan Mountains. The sea resort is beautiful in the summer, full of vacationing families, and is a very popular ski resort in the winter. Kyrgyzstan has a population of 2 million, with many nationalities. We continued on 286 Km to Bishkek, the capital, which has a population of 900,000. Bishkek is 65% Muslim, and has a 97% literacy rate. Russian independence was also achieved in 1991. 20 year anniversary celebrations were going on in Kazakhstan and Kyrgyzstan.

We flew to Osh, the second largest city in Kyrgyzstan, located in the fertile Fergana Valley. We crossed the Syr Darya River, which is the border between Kyrgyzstan and Uzbekistan, and were now in the area founded by Alexander the Great in 329 BC. Traders from China came this way as they created the trade route, the great Silk Road in the 1st century BC. The Fergana Valley became a rich oasis with irrigated fields producing grains, fruits, silk, cotton, nuts and vegetables, and supporting horses, cattle, sheep and camels. There is evidence that Buddhism made its way here from China before the advent of Islam during the 8th century AD. The city of Fergana(Uzbekistan) is the newest settlement in the Fergana Valley, established in 1876 as a Russian garrison town, and today still seems more Russian than Uzbek. We made a day trip to Margilan, a major Silk Road stop dating back to the 9th century, with a wonderful market, and a factory for making beautiful silk. We went on to the village of Rishtan, famous for its ceramics. You can guess what happened there ~ that’s right! Klewenos like pottery! We had a lovely lunch at the home of the Master Artist. Our day ended with a visit to the city of Kokand, where almost every building is painted orange! Kokand is a scientific and historical center with over 100 mosques, but many were destroyed by the Russians in 1876.

We had dinner in the home of a family of 5 in Fergana City. The Father is a financial auditor/inspector in medical health facilities in Uzbekastan. He has traveled to other foreign countries and to the US for seminars and presentations in his professional field (we related quite well to his profession!) The Mother has stayed home with the 5 and 2-1/2 year old children. The 5 year old has been to pre-school and is starting kindergarten, and Mom hopes to get a part time job. The Father sat at the table with us, but Mom and her other adult family members did the cooking of a traditional Uzbek meal ~ eggplant, tomatoes and cucumbers from their garden, the delicious bread and what we know as “rice pilaf” with beef meat. All delicious! We gave M&M’s, stickers and silly bands to the children ~ and they were typical 5 yr old girl and almost 3 year old boy siblings sharing new toys and candy! Was a most pleasant evening.

On August 30th, after one more early breakfast we began the next long bus ride over Kamchik Pass, which is a long climb thru the Chatkal Mountains ~ buses not allowed, so we were in private cars, in a caravan. Were stopped at several check points, some for the driver and/or the car (“pop the trunk”,) and some asked for passenger passports, When they asked for ours at the last check point, they had a good laugh at my picture in the Iranian “hijab” ~ at least that’s what I think they were laughing at! But, who really knows for sure! At least, we got our passports back and were waved on.

We arrived in Tashkent in time for lunch and a tour of the beautiful and modern capital city. City was heavily damaged by an earthquake in 1966, but has been rebuilt. We visited beautiful old ~ 6th and 7th century ~ mausoleums, madrassahs, and mosques. They call the cities the “modern Silk Road”. Must close this travelogue now ~ it is 9:45 pm on Monday ~ we just finished having a family dinner of the traditional “plough” which is similar to our rice pilaf.  We even learned how to make it in a big pot over an open flame!  The night is still very warm, close to 80F we’re guessing. Our air conditioning is a godsend!  (can’t wait to get to Iran to wear a black hijab over my clothes in 85F+!!  We are getting up at 5 am to go to Kiva, Uzb. ~ 500+ Km on a road that is under construction ~ being built by Korean workers ~ through a desert ~ where in some places there is no road ~ there are no bathrooms or restaurants along the way ~ it is at least a 9 hour drive in a big, bumpy bus!  I shall never again complain about a long ride with a few bumps!  Have no idea what the Internet connection will be like in Kiva, so hope to write again soon, but don’t be surprised! Central Asia has historically been an ethnic bridge between the Turkic and the Persian cultures.  Persian Iran loaned its desert architecture of mud brick and glazed tiles, its Islamic beliefs and its decorative motifs to the
Turkic-speaking peoples of this region. The Turkic Silk Road merchants shared their exotic wares with the Persians and both cultures were inestimably enriched. Today’s traveler is surrounded with the results of this melding of
beautiful materials, visionary architecture and deeply hospitable people. More than 2,000 years ago, the great trade routes that linked Europe and China opened Central Asia to foreign cultures, customs and religions.  Join a modern-day caravan on an epic journey to five of these exotic countries – Kazakhstan, Kyrgyzstan, Uzbekistan, Tajikistan and Turkmenistan. Begin the tour in Almaty, the largest city in Kazakhstan. Seated at the foot of the Tien Shan mountain range, Almaty may have been the place where apples were first cultivated.

Travel through the soaring rock formations of Charyn Canyon to beautiful alpine Lake Issyk-Kul. The majestic Kyrgyz Alatau range hovers over Bishkek, the capital of Kyrgyzstan. From Bishkek, fly to Tashkent and drive into the fabled Fergana Valley. According to ancient Chinese sources, the Fergana Valley was thriving as early as the 4th century BC. Spend a night back in the capital, then drive on to Samarkand.

Explore the blue-tiled mosaics of Samarkand, UNESCO-listed Shakhrisabze, the interlocking brickwork of Bukhara with its fabulous covered bazaar, and the winding alleys of Khiva. Cross the border into Tajikistan for a day visit to the 5th century ruins of Penjikent.

The last stop is Turkmenistan, heir to more than 2,500 years of stormy history. Explore the ruins of the Parthian city of Nisa and those of mythical Merv, both UNESCO World Heritage Sites. Get a final taste of Turkmen culture as you stroll the Tolkuchka Bazaar in Ashkabad, admiring the deep red carpets and handcrafted jewelry. 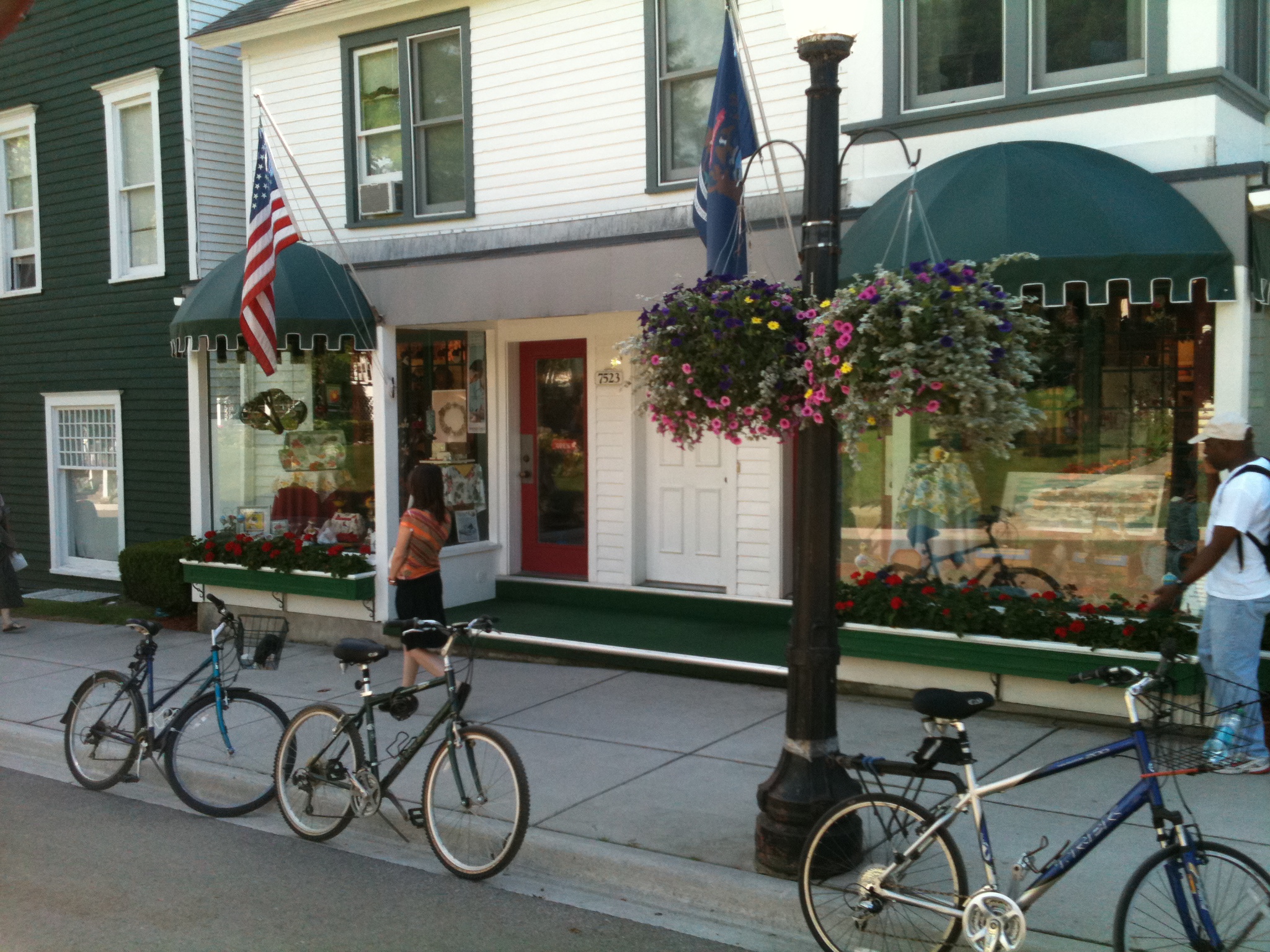 To Mackinac and Back!

To Mackinac and Back!
Interested in planning your own customized adventure? Global Adventuress can help! Email us today!